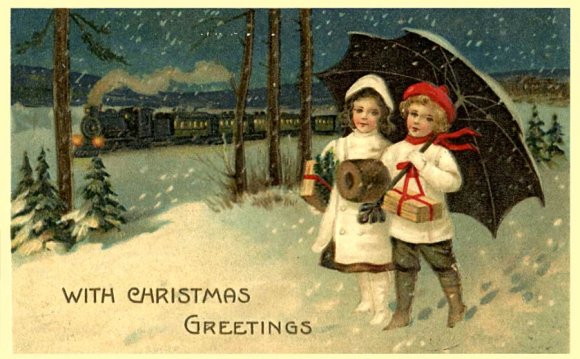 A recent post on the photo blog The Passion of Former Days alerted me to the Australian War Memorial’s large digital collection of embroidered Christmas postcards, sent home from Europe during World War I. The items, which feature cheerful and patriotic messages worked out in silk floss, reminded me of the soldier-stitched sweetheart pincushions I featured on this blog last year.

But while men crafted those mementos on their downtime or while recovering from injury, these postcards, made year-round and bearing both holiday-related and more generic messages, were the work of local women. The small industry that sprang up around the cards was a way for French and Belgian citizens, many of whom were displaced from their homes during the war, to earn money doing portable piecework. Women would embroider a message or design on a strip of silk mesh or organza.

The companies that mounted the finished strips on paper postcards churned the items out in factories. The Library of Birmingham estimates that, in total, around 10 million such cards were produced during the war. As a result of this overproduction, many samples of embroidered cards still exist a hundred years later. (The Australian War Memorial alone has digitized 625 examples.)

Some cards had pockets on the back, where smaller cards could be tucked. A cherub takes trench dictation.