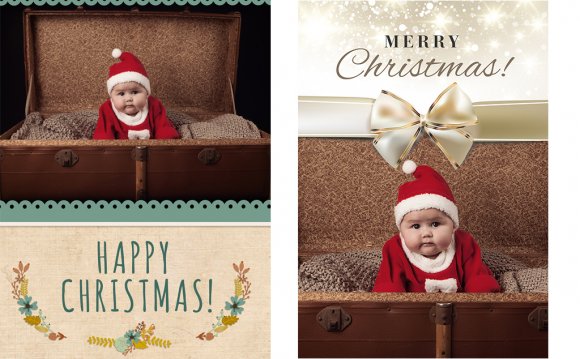 One of the nice things about Christmas is the opportunity it gives one to look at how other people do it and be indignant or appalled. Do you let your kids open some of their presents on Christmas Eve? (You are RUINING them). Or make them wait until after lunch on Christmas Day? (Bit harsh). Deviation from Christmas routines set in childhood can cause problems with spouses. What do you mean we're not eating until 5pm and you want roast beef not turkey? Who are you?

The easiest target at Christmas used to be those old-world round robin letters, that my colleague Simon Hoggart compiled in a book, and which in the US at least have been supplanted by the family photo holiday card. This year, I haven't received a single card that doesn't feature at least one gurning 13-year-old, some interesting state-of-the-marriage body language between couples or a large, bald baby.

As a document of family life in the early 21st century, these cards are smug and also touching; many of the tableaux are of second families – the kids will be in more than one photo-card this Christmas – and the artwork a public statement of unity.

They are also revealing of their subjects' idealised self-image, be it formal in suits and frocks or so casual you can't tell the parents from the teens. As with most publicly shared photos, you get the feeling the senders are trying to persuade themselves of something, although what, exactly, it is hard to pin down. Looking at them, I'm reminded of lines from the Stevie Smith poem, Voice from the Tomb (5), A Soul Earthbound by the Grievance of Never Having Been Important: "You never heard of me, I dare / Say. Well, I'm here." We forget, sometimes, that social media enables impulses that have always been with us.

Of course, several family productions have gone viral, and I don't mean the – although if their example teaches us anything this season, it is be faithful to brand You.

Below are some other fun ones.

Here we have Jamie Dimons, in a fun family shot that has caused Time magazine, among others, to tut at the size of his living room.

Creepy and owning it.

And a viral holiday video from the Holderness family, only slightly undermined by the fact that it is also a canny advert for their media business. Still, it's pretty jolly.

The fall of what was, until recently, a hold out against personal branding is a logical extension of the commercialisation of Christmas and not even that modern. The royals have been doing it for years, with their tweedy but rather sweet family Christmas cards, many of which now circulate on a thriving memorabilia market – according to this particular inventory, "David", "You both", and "Princess Margarita of Yugoslavia" are all cashing out their friendship with Prince Charles for upwards of $4, 000 a pop.

For the rest of us, the value of the personalised Christmas card is in its reassurance that, however dysfunctional our own set-up, at least we're not trapped in someone else's Chekhovian family scene; you don't get that with a snow-capped robin. They might be twee and narcissistic, they might scream 'tis the season of self-love, but in their naked bid for approval, there is something strangely poignant about these images. They are an idea, in the moment, of what happiness looks like.

Christmas in Australia - Personalised Photo Mug for only $5.95