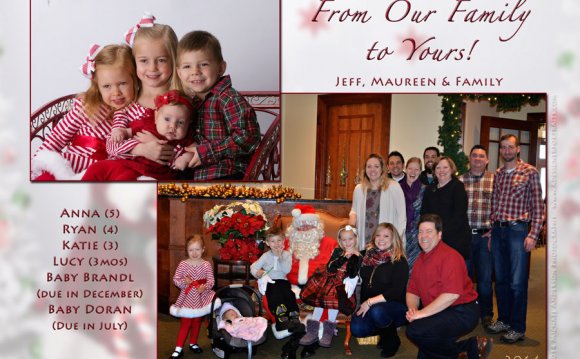 Picture-perfect! The Duke and Duchess of Cambridge released a new family portrait the morning of Friday, December 18, which will serve as the couple's Christmas card.

The photograph shows Prince William, Kate Middleton and their two children, Prince George, 2, and Princess Charlotte, 7 months, posing on a lawn in a fairly informal setting.

The snap, in which both Prince William, 33, and his wife, also 33, are crouching down to their children's level, was taken by photographer Chris Jelf in late October, and shows a little red train sitting on the grass in front of them all.

Prince George is wearing adorable little shorts with socks pulled up to his knees, while Princess Charlotte is pictured in a pretty pink dress with a matching cardigan, the same outfit she wore when she posed for photographs taken by her mom, Kate, back in November.

"I thoroughly enjoyed photographing a very lovely family, although you have to be sharp as you don't have long when there are two young children involved!" Jelf said of the exciting commission. "I hope everyone enjoys this photo and I am honored that The Duke and Duchess have decided to share it with the public."

The proud parents released the adorable photograph for the holiday season and have thanked the public, via Kensington Palace, for their warm wishes as Christmas approaches.

"The Duke and Duchess are hugely appreciative of all the warm messages they have received about their family this year, " the palace said in a press release, adding that the couple "are very much looking forward to their first Christmas as a family of four."