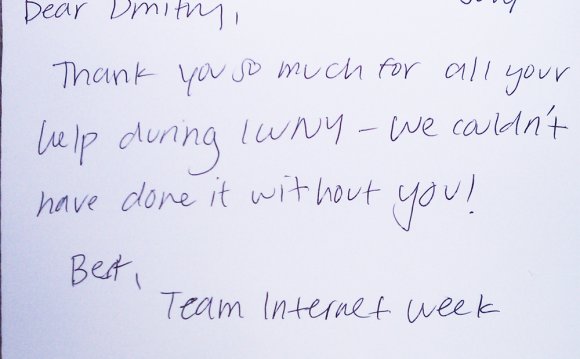 They were serious. So serious they got bought out. As I looked for the site now to include in this post I found they had been acquired by FTD. In less than two years they had made enough disruption that the big boy came to buy them. There goes that good thing.

But the reason I bring Kalla up is because they had incredible execution. After delivering an exceptional product with exceptional presentation, they ended with further perfection. Two weeks after my wife had placed the order, she received a hand written card in the mail. The address was handwritten and inside was a handwritten simple Thank You note.

They nailed it. The card said blah, blah, we nailed it and you love us now.

No it didn’t say that.

But it could have.

It said something like I’m Elsie and I’m here for any other flower needs you have. Thank you for your business.

Regardless, it was perfect. It made such an impression on both of us that here I am two years later talking about this simple thank you note.

It was impressionable because it took time and effort. We receive so many emails these days. Nobody wants to talk on the phone. But old school snail mail is still cool. This was a way to show they cared. It separated them from the pack.

So when my wife started her online store, she knew she wanted to do this. Its labor intensive and not systematic. Its time consuming and expensive.

But it works and it makes a difference.

Why are they going to buy from her?

Because she offers a curated collection with exceptional service. That’s why.

But It’s Not Scalable?

So as the business continues to grow in her first year, she has started to get swamped. She is being eaten alive by thank you notes. She has handwritten all them herself up to this point. Its getting a little overwhelming and its probably not the best use of her time.

As I read more about successful people and successful businesses i see repeated themes. To grow and to scale you must create processes. Tasks that are teachable or repeatable should be taught and delegated to someone else.

I highly recommend the book E-Myth if you haven’t read it already. Its the basis for the idea of systematizing as your business grows.

Got a Spare Writing Hand?

My wife doesn’t have an army of employees and she can’t afford to hire someone. At least not now. It doesn’t make sense to write a simple thank you note.

I knew there had to be a way to get Thank You notes written by someone else. We can’t be the first person to of thought of this. I Googled “thank you card writing” and sure enough, there it was.

I found a small company out of Baltimore that looked perfect. They weren’t too big and their site looked just basic enough that I thought they would be affordable.

Unfortunately they did not have their pricing online so I had to submit an inquiry. I filled out the information and waited the weekend.

And finally we received an email from them. Bad news, it was too expensive. They offered exactly what we wanted. They would hand write all the thank yous. When they were done they would send them back to us so that my wife could postmark them from Miami Beach.

The problem was that it was going to cost $3.24 per thank you.

This was too much.

As it stands, my wife spends 60 cents on the card and envelope and 34 cents to mail it. Thats about $1 plus her time. With another $3.24 on top of that, this was approaching per order.

It didn’t make sense at this point.

I had to get creative. Surely there was someone who was sitting at home doing nothing. Why wouldn’t they want to entertain themselves and make a little extra money?

This is as much about entertaining themselves as it is about making the money.

We are not talking serious cash.

We had decided that to write the thanks yous was about as much as she could justify spending.

I took to Google again in search of other options. I did find some other services and surprisingly they were more expensive. These were larger more legitimate companies. They appeared to be doing this for some large brands. They were close to per thank you.

I was headed in the wrong direction. I just needed a hand and a pen. This is not rocket science.

Then I remembered a lady who actually writes blog posts for one of Bob and My sites. She writes for us once a week but had expressed interest in writing more if we needed it. She has been doing this for almost a year and is reliable and competent.

I sent off an email and waited the weekend to hear back from her.

On Monday morning she politely declined. She just said that she would pass. I suppose the money wasn’t great or maybe she didn’t like writing. Either way, I couldn’t blame her.

(Yes from 3 Strikes in Baseball to Football We go. I was already out in Baseball and I need a last chance. There’s no 4th Strike..)

Two weeks passed and the thank you notes were piling up. I had to find a way to get someone to write them for her. When in doubt head to Craigs List.

I can’t tell you how much stuff I have sold over the years on Craigs List. This site still amazes me. A simple site, with no design, is so incredibly powerful.

So last night I typed up a job description and posted it on Craigs List. I used one of my favorite little tips.

Over the years Bob and I have posted a lot of job postings on Craigs List. Unfortunately with the good comes the bad. There are tons of people on Craigs List that just apply for any and all jobs without reading.

I clearly state that when applying for the job they need to include the name of their favorite Disney character.

It seems silly but this does two things.

2. It shows that we are real people.

I like the lightheartedness of the question and you would be surprised how many people this weeds out. I even put that your inquiry will be ignored if you don’t include this.

PLAYSTATION CARD GIVEAWAY|| Thank you for staying with me ...