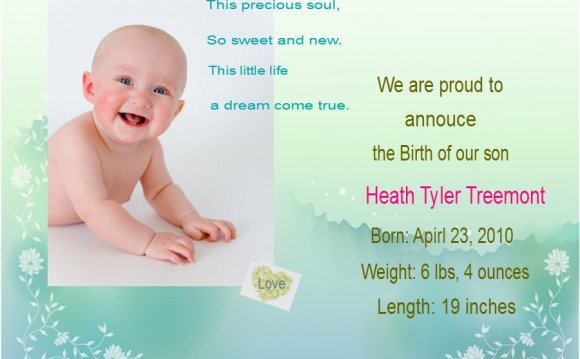 7. In terms of simple ideas, we are so taken with this one: A Hello: My Name Is name tag stuck onto a baby’s swaddle blanket, as seen here in this birth announcement photo idea by photographer Heather Golde. We even love that the nametag is in focus, with the baby set a bit back on the background, giving priority to a name that was probably kept secret until the big reveal.

8. Yes, it’s over-the-top, and requires serious propping. But we’re laughing at this hilarious air pump baby announcement. This took significant planning over 40 weeks and yeah, professional art direction and uh, a photo shoot with Patrice La Roche. But what a fun-loving family for this lucky baby has been born into.

9. In similar vintage film-strip style, check out theatrical The Magic Show creative birth announcement photos snapped by pro Dan Culberson. It’s definitely not for everyone, but for this couple, it’s perfect. Plus they seem like people we want to hang out with, even after the baby. That’s always a plus for announcements.

10. It’s so sweet to get older siblings involved, and this one incorporates a chalkboard, which we all know by now is the hottest prop to hit photo cards this decade. It was assembled by a (paid) editing tool called Compositor which makes storyboard style layouts, and we spotted it on Momtog but would love to track down super clever parents who took part in this one.

11. Second only to blackboards: on the sidewalk. A great example of how that can work is from photographer Kelle Hampton, resulting in a simple, memorable birth announcement photo idea. Of course this might be best for moms of two or more, who have gotten over their fear of laying a baby down on a sidewalk for a few minutes. (Ha.)

12. This version of the iconic LOVE graphic is so simple, but looks so impressive (like many of the best ideas, right?). We found it at How to Nest for Less, but again, we wish we could find the original source for more creative ideas like this one. Notice how the sheets aren’t perfectly pressed and the baby’s arms aren’t perfectly in focused? That’s okay.

13. How great is this custom birth announcement onesie by Petite Lemon, designed with all of your baby’s important birth stats? We’ve seen quite a few of these, but the strong colors will make the photo much easier to take, like this baby photo from Ahhmazing Reviews. Just set your baby down on a neutral but interesting background (this bedspread works well) and…easy. Plus, you don’t need to take up the front of the card with all the stats since it’s built right into the photo.