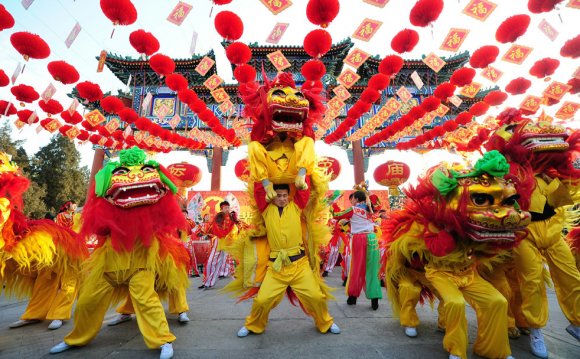 This huge Chinese New Year celebration will fill most of the West End with music, acrobatics, activities and pyrotechnics. A grand parade featuring ten lion dance teams will set of from Trafagar Square at 10am, and end up in the heart of Chinatown.

On Wardour Street and Gerrard Street there will be craft stalls, Chinese street food stands and more traditional dance, plus a stage on Shaftesbury Avenue.

On Charing Cross Road there will be musical performances from Chinese Young Culture Ambassadors and a martial arts display as well as crafts and workshops for the whole family.

Regent Street will be celebrating Chinese New Year with a traditional Chinese Wishing Tree which will be stationed on Glasshouse Street from 11am – 3pm.

The ancient tradition of the Wishing Tree is synonymous with good luck and fortune, and the legend goes that hanging your hopes for the coming year on a Wishing Tree will encourage your dreams to come true.

Members of the public are invited to visit the tree and receive a bespoke wish written by an authentic Chinese calligrapher to take home along with a golden chocolate coin, for added good fortune.

Where to eat Chinese food in London

The 100 or so restaurants, bars and cafés in the area will have special menus and their own events on offer but book now to avoid disappointment. Sophie Campbell, our London expert, makes her recommendation

Y Ming (020 7734 2721; yming.co.uk) 35-36 Greek Street, W1: This place is small, friendly, not in the least bit interested in being hip and serves northern Chinese food, rather than the Cantonese you normally find in London. The vegetarian options are great and they do a pre-theatre menu for £12.

Try the soft shell crab (£8.50) or the beef with coriander in a wrap (£11). They also say on the menu that if you want Peking Duck done properly it requires four hours' notice, so that's on my wish list.

And I do like dim sum at the Royal China on Queensway, Bayswater (020 7221 2535; rcguk.co.uk), partly because of the workmanlike servicing of huge circular tables full of Chinese families, business people and locals, and partly because they do great dumplings.

I'm a sucker for the Shaolin Monk Hotpot, which has lots of bean curd in it and I always hope will be thrown across the room by a martial artist, and they do the sublime Mango Pudding, loathed by everyone I know except me. I consider it right up there in the culinary pantheon with Jam Roly Poly.

They've got a number of other sites in London. There's a good one on Baker Street.

Tickets are now on sale from and runs from Febuary 3 to March 6 at Chiswick House Gardens in west London.