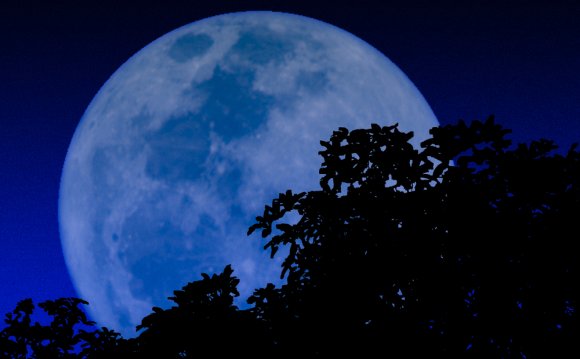 The next Blue Moon will be on May 21, 2016. It’s a seasonal Blue Moon, the third of four full moons between the March equinox and the June solstice of 2016.

In recent years, people have been using the name Blue Moon for the second of two full moons in a single calendar month. An older definition says a Blue Moon is the third of four full moons in a single season. Someday, you might see an actual blue-colored moon. The term once in a blue moon used to mean something rare. Now that the rules for naming Blue Moons include several different possibilities, Blue Moons are pretty common! Follow the links below to learn more about Blue Moons:

Can a moon be blue in color? There’s one kind of blue moon that is still rare. It’s very rare that you would see a blue-colored moon, although unusual sky conditions – certain-sized particles of dust or smoke – can create them.

The time between one full moon and the next is close to the length of a calendar month. So the only time one month can have two full moons is when the first full moon happens in the first few days of the month. This happens every 2-3 years, so these sorts of Blue Moons come about that often.

The idea of a Blue Moon as the second full moon in a month stemmed from the March 1946 issue of Sky and Telescope magazine, which contained an article called “Once in a Blue Moon” by James Hugh Pruett. Pruett was referring to the 1937 Maine Farmer’s Almanac, but he inadvertently simplified the definition. He wrote:

Seven times in 19 years there were — and still are — 13 full moons in a year. This gives 11 months with one full moon each and one with two. This second in a month, so I interpret it, was called Blue Moon.

EarthSky’s Deborah Byrd happened upon a copy of this old 1946 issue of Sky and Telescope in the stacks of the Peridier Library at the University of Texas Astronomy Department in the late 1970s. Afterward, she began using the term Blue Moon to describe the second full moon in a calendar month on the radio. Later, this definition of Blue Moon was also popularized by a book for children by Margot McLoon-Basta and Alice Sigel, called “Kids’ World Almanac of Records and Facts, ” published in New York by World Almanac Publications, in 1985. The second-full-moon-in-a-month definition was also used in the board game Trivial Pursuit.

Today, it has become part of folklore.

Opinions vary, but, remember, this is folklore. So we, the folk, get to decide. In the 21st century, both sorts of full moons have been called Blue.