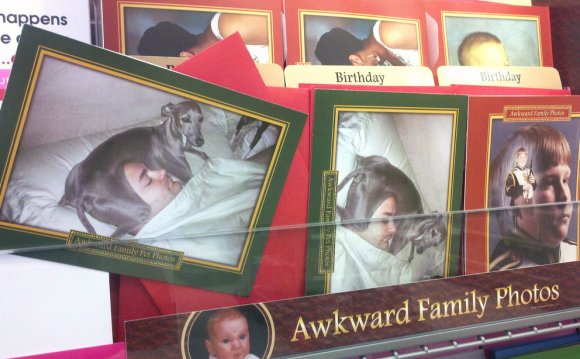 Nothing quite says Christmas like a festive photo - however, when capturing those memorable moments, some families have been left with less-than-perfect albums.

Whether it's Mummy and Daddy's angels having a tantrum just as the photographer hits the button, or parents and children pictured relaxing in a hot tub, these photoshoots reveal the awkward side to family snaps.

The snaps have been submitted to Awkward Family Photos, no doubt by people who wanted to shame their misbehaving family members.

Smile! This baby can't contain his unhappiness at being snapped for a family photo while wearing a crocheted Father Christmas outfit. The parents posted that despite many attempts, that was the best they could get

'I don't want my photo taken': This little boy's baby sister seems to echo his sentiment as he bursts into tears while wearing a red sweater for Christmas. Or perhaps she was the first to cry because she's been forced to wear a Santa outfit - complete with hat

The family that hot tubs together... This family thought it would be a good idea to relax with a drink in the garden with their children - but no doubt didn't realise at the time that the photo makes them appear to be naked

Misbehaving children seems to be a common theme in these laugh-out-loud images - with one baby bursting into tears as she's dressed in a crocheted Father Christmas outfit.

The child looks incredibly unhappy - and the parents posted that despite many attempts, that picture was the best they could get.

Another image shows a daughter wishing her mother 'Merry Christmas' - but what starts out as a sweet idea, doesn't end up going to plan - as she holds up the word 'ho' beneath the sign.

Although it's clearly meant to be part of Santa's trademark 'ho, ho, ho', it instead comes across as a rather rude insult to her mother.

'I wish I had a sister': This little girl can't contain her unhappiness as she poses with her two smaller brothers while wearing matching outfits - although the siblings aren't making a fuss, they too seem downhearted

Another photo submitted to the website shows a Christmas photo taken of two children playing by a Christmas tree, while their father reaches up behind them to place a star on top of it.

But from behind, his underwear can clearly be seen poking out of his trousers - and, each to their own, he's wearing a blue thong.

In another snap, what's meant to be a photoshoot for a Christmas card descends into chaos as the two children burst into tears - the little girl, who is wearing a Santa outfit complete with a hat, is crying while her older brother lies on the floor, obviously beside himself with unhappiness.

The rest of the images include a young girl, dressed in matching outfits to her two younger brothers, posing in front of a Christmas tree for which could have been a touching family snap.

However, the look of disappointment on her face is unquestionable, as she stares into the distance, perhaps wondering whether she'll ever have a sister.

Tis the season to be slobby: A father reaches up to the Christmas tree and exposes more than what he had hoped for - as his two young children are oblivious to his antics

This daughter surely had good intentions, but the word 'ho' ruins the sentiment of this Christmas card

In another Christmas card fail, the family photo included the mum and dad, their son and his girlfriend.

But when, not long after the photo was taken, the couple broke up, that didn't bother the parents.

They simply covered her face with a sticker that reads 'TBD' - To Be Decided - and sent it out to their family and friends regardless.

Another shot submitted to the site shows a young boy sat on Santa's lap protecting his groin with his hand.

From the grimace on his face - and his eyes looking sideways - he seems concerned about Father Christmas.

When this couple split up, the parents had the perfect solution - covering their son's ex-girlfriend's face with a sign that read 'TBD' - and they sent the photo out as their Christmas card to friends and family