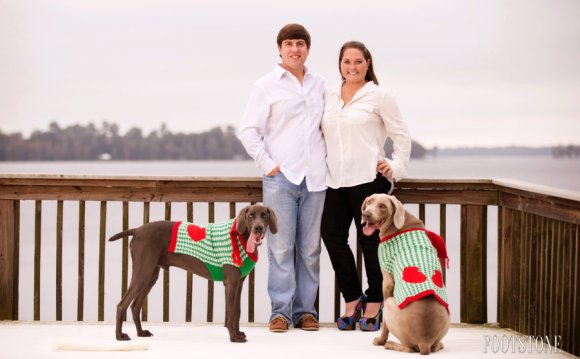 Where to shoot
You can’t beat the outdoors for backdrops. Steve likes to shoot in open shade, such as the shade of a tree. It provides flattering light on people without making them stare into the sun or squint.

Indoors he says to keep it simple. To avoid a lineup against a wall, shoot the group in the middle of the room to create depth. Find a backdrop view that isn’t too busy and doesn’t detract from the focus of your portrait—the people.

Don’t turn the camera to auto mode yet. You can do this. The aperture, or lens opening, is generally marked with numbers, such as 1.4, 2, 2.8, 4, 5.6, 8, 12 and 16. The lower numbers (which correspond to f/stops) give more exposure and the higher ones give less. They also control how much is soft or sharp. The smaller the f-number, such as f2.8, the less “focus” there is. Conversely, a high f-number such as f16 provides a good deal of focus.

In a bright house, the camera will have a tendency to underexpose. Hallmark photographer Steve Wilson says you can “trick it” by setting the camera exposure compensation setting to +1 (an extra stop brighter), so the picture is a little overexposed.

Most cameras have an auto and manual setting. You don’t have to be a professional to use the manual setting. For a picture of a family of 12, for example, use a tripod, set the camera to manual mode, set the lens to f5.6 or f8, adjust the shutter setting, and test until you get a pleasing result. That puts the people in focus and everything around the people a little out of focus. Set the lens to f4 for individuals. For couples, do the same, but get in close.

If you are using a self-timer, set the timer for 10 seconds so that everyone is not waiting forever for it to go off. If you don’t have a self-timer, consider getting a wireless remote so you can shoot pictures whenever you’re ready.

Arranging the people
Rather than lining up people, Steve suggests “clumping” them casually. He likes to put the oldest generation in the middle and work outwards from there. He urges people to sit on the arms of chairs, hug each other and overlap as much as possible. This creates a more casual, natural-looking photo.

To break the ice, Steve suggests being a little goofy for a while to make everyone more comfortable. Let the photo shoot go on long enough for people to relax.

What to wear
Keep the clothing simple as well. Solid colors and subtle patterns are better than bold patterns. He tells people to avoid white. He says he also gets better photos when people are comfortable in what they are wearing. Need more ideas? Try these tips for stylish, stress-free family photos from our friends at Think. Make. Share.

Hallmark photographer Jane Kortright has spent many hours on her stomach face-to-face with adorable babies and children. Getting up close and personal is just one of a few tricks in her taking-that-perfect-photo bag.

Be prepared
Before you gather your angelic subjects, make sure you are as prepared as possible. After you have your child front and center, you may not have very much time before her mood shifts or he tries to escape. Try to plan for these contingencies by having favorite toys at the ready to draw their attention. Having a way to confine them somewhat during the shoot also helps.