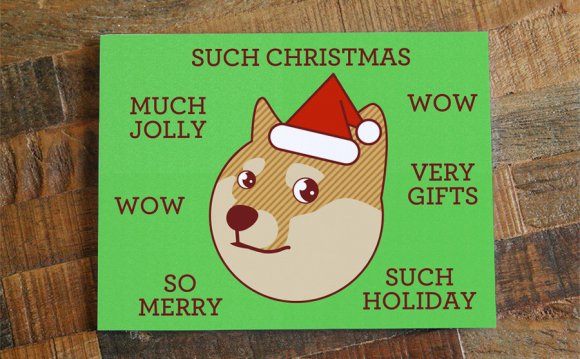 I got a pretty exciting package from my mom recently: A container of my grandfathers’ Christmas cards from 1955. These aren’t personal Christmas cards, but rather leftover cards from my grandfather’s failed attempt at starting a greeting card company a few years after WWII. Here is a picture of the original Bradwick McGinty from around that time.

My dad said that instead of going to church on Sundays, my grandfather would often go “Irish fishing, ” which entailed leaving before sun-up and returning late in the day with a bunch of stones. My father was never allowed to go with him, because he was half woman (on his mother’s side).

Anyway, that picture wasn’t in the package. But this one was:

A few years after my Grandfather returned from the war he decided to start a greeting card company. Armed with one terrible idea and no artistic ability whatsoever, he turned to someone he had met during the war for help, a young Japanese solider he had shot in the face named Haruo.

My grandfather spoke no Japanese, and Haruo spoke no English, so how they actually got together is beyond me or anyone else in my family. The idea involved creating American-style greeting cards for both the Japanese and the American markets. It also required Haruo to create all the artwork and handle all of the printing. My grandfather would simply mail Haruo photos of what he wanted, and Haruo would see to the rest. The above picture was taken in the office of my grandfather’s lawyer.

An interesting side note is that my grandfather had to travel all the way to Grantville, Georgia to use a “colored” lawyer, due to the fact that the Irish were considered “colored” in Georgia until 1963.

The story of my grandfather’s failed card company was pretty well known in my family. My grandfather always insisted that it ruined his life and was the cause of his “whiskey fits.” Not only did he blame Haruo for the fiasco, but all of Japan for his financial ruin. He even went as far as to contact the Irish Press in 1956 with a completely fictitious tale about being swindled out of his money while trying to stop a Japanese murder plot against the Pope.

No one in the family had ever seen any of the cards that were produced. It was thought that my grandfather set fire to all of the cards (and the boat) the moment they arrived in the states. That is, until my mom stumbled upon this ammo case in the attic:

I can’t even tell you how excited I was to finally see the cards that “killed my grandfather” and drove my family into extreme poverty. I actually think Haruo did a pretty good job interpreting my grandfather’s original sketch, considering the severely confusing nature of his drawing. It’s anybody’s guess as what my grandfather expected to get back, but needless to say it wasn’t this beautiful card:

Why not make my grandfather happy and send some of these cards to your friends and family this holiday season? That’s right, I’m offering what is left of my grandfather’s hopes and dreams for a mere $5!

These Funny Christmas Cards Make Everything About The ...